Analyzing What Makes Us Laugh

There are words that are just funnier than others. When Joseph Heller submitted his final copy of Catch 22, it...

There are words that are just funnier than others. When Joseph Heller submitted his final copy of Catch 22, it was originally called Catch 18. Heller’s editor read the title, stopped in his tracks, and argued that the number 18 just wasn’t working. The editor then had an epiphany and wrote a letter to Heller late one night saying: “It’s Catch-22. It’s funnier than 18.” And that is how one of the most common idioms used today was born. 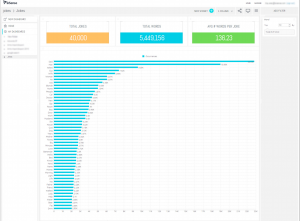 Now, what exactly does it mean when a word is funnier than another word? Sure the word ‘canoodle’ is inherently more funny than a word like ‘window’, but what if you want to get more specific? We used data visualization to actually pinpoint words that are most commonly used in popular jokes to see which words, subjects, even professional tickle our funny bone. We uploaded 40,000 popular jokes into Sisense dashboard software and here’s what we found (see full report):

A Blonde and a Dog Walked into a Bar

“Old” makes us laugh more than the word “Blonde”, and “God” is funnier than “Dog”. It’s interesting to see that most jokes are told in a conversation form considering 2 out of the top 3 words are “Said” and “Asked”.

It makes us laugh more when people respond “No” in a joke rather than “Yes”, and males are easier to laugh at than females. If you’re a doctor, bartender, or teacher, you are more likely to find yourself at the butt of jokes.

We confirmed our findings by reading the top data analyst joke on Reddit that goes like this:

Old data analysts never die–they just get broken down by age and sex.

“Old”, check, “”sex” check– I’d say this dashboard is right on track. Have any more data analyst jokes? Share with us below!