Don’t Read this Before You Get on a Plane: 100 Years of Aviation Insights

Just over forty days and forty nights since Malaysia Airlines Flight 370 disappeared en route to Beijing, and the majority...

Just over forty days and forty nights since Malaysia Airlines Flight 370 disappeared en route to Beijing, and the majority of what’s flooding the headlines are mere conspiracy theories as the world tries to grapple with the idea that an aircraft carrying 239 people from 14 nations just disappeared.

Data from Over 20,000 Flight Incidents 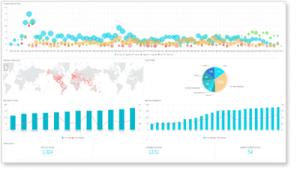 While some people are vowing never to fly again, simply looking at real data from the past 100 years of aviation incidents is an eye-opening way to get a more rational perspective on this international tragedy. By creating a dashboard with data from multiple data sources (ACI, Aviation Safety Network, and Openflights.org) using Sisense data visualization tools, it’s easy to visualize and analyze the information of approximately 20,000 flight incidents in the past 100 years, from commercial to military and in airports all around the world, and gain incredible insights on a century of aviation:

To get a better feel of the footprint MH370 may leave on history, we drilled down into information about missing flights specifically, and here’s what we found: There have been around 100 missing flights around the world in the past century, most of which were small, private flights that are harder to track, with an average of 13 fatalities per flight. The total number of fatalities on missing passenger flights is roughly 1,324, and the highest single incident had 69 fatalities.

Missing Flights and the Impact of MH370

Possibly the most shocking news of all is that considering 13 is the average number of fatalities for missing flights, MH370 is statistically the most tragic missing flight incident with the highest fatality rate in a single incident that (may have) ever occurred. It is also important to note that missing flights is considerably rare, especially ones carrying more than about 50 passengers. If you are flying on a commercial flight, disappearing shouldn’t be one of your top concerns, however sensational the media is making the idea of it out to be.

General trends for all aviation incidents are also revealed in the dashboard such as the fact there are less en route incidents than ever before, though there has been a very clear and quite disquieting increase in landing accidents in the past 10 years. The number incidents during takeoff, approach, and initial climb has stayed at the same low throughout the years. And the burning question people always seem to ask is clearly answered here: the safest month to travel is April and December, and the best hours for a safe departure and flight is between the hours of 12am to 6am (3pm to 9pm being the least safe). 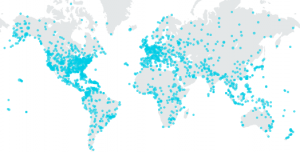 We also analyzed passenger flight accidents with fatalities by the origin and destination airport, and discovered the origin airports that were most likely to have an incident was Manila, Los Angeles, Newark, and New York. Of course, these flights are not at a higher risk necessarily since statistically there are many more flights coming and going from those popular areas. Approximately half a million flights per year leave these top airports, compared to a less popular destination like Indianapolis International that has approximately 50,000 flights per year.

From a historical perspective, there’s a lot to be learned about wars and economics in the past century by just looking at the spikes in airplane accidents. During World War II in 1943-1945 there is a sharp spike in en route airplane accidents since both the United States and Europe were using military combat aircrafts to fight the war. In fact, if you drill down you can see that 77% of the flight incidents across Europe was military.

Similarly you can spot the years 1967 and 1968 in seconds by seeing the sharp increase in airplane incidents caused by the Vietnam War as well as the upheaval in the Middle East with wars such as the 1967 Arab-Israeli War. On the flipside, wars that did not involve heavy air combat, such as the Gulf War (1990-1991), there is no sudden increase in flight incidents during those years.

World-wide economic recessions are also reflected in the graph, as fewer people were able to afford flight tickets causing fewer airlines to schedule flights, and leaving a small dip in the number of airline accidents. The economic crisis in the early 1980s and 2000s can be clearly traced and the correlation is surprisingly accurate with past economic recessions.

MH370 Tragedy Aside, Flying Is Safer

Though the case of MH370 could have the highest number of fatalities for a missing passenger flight, this data doesn’t propagate conspiracy theories of hijacking, terrorism, or a black hole–its hard facts and numbers that show overall airline safety has improved as less and less fatalities occur over time. This has been attributed to more reliable planes, better regulations and smarter safety procedures. As Christian Wolmar of the Guardian points out:

“Safety has improved to such a degree that crashes of jets run by established European, American and Asian operators are relatively rare, and attract the kind of blanket coverage accorded to the demise of flight MH370.”

So before you board your next flight, realize that the drive you took coming to the airport is significantly more dangerous with more than 5 million accidents compared to 20 accidents in flying. Analyze that.