If you’ve ever participated in a live auction, you know there’s some strategy involved in order to win the item...

If you’ve ever participated in a live auction, you know there’s some strategy involved in order to win the item you want. But what about online auctions? In our new GoFigure! analysis we take a look at data about all the action in the seven-minute eBay auctions.

The dataset we found on Kaggle includes data about unique auction number, the list of bidders, every bid that was given for the whole length of the auction, open bid price, and winning bid price. This piqued our interest because we figured that, from this data, we could learn a great deal about how to strategize to win the seven-minute auction.

If we focus in on auctions for Cartier watches, we find that the distribution of bidding strategy is:

Time is of the essence

Since the auctions have a very strict time limit and take place for seven minutes only, time is of the essence. Every second counts. The data shows that 19% of the winning bids are placed at the last 15 seconds of the auction. Specifically for the Cartier wristwatches, we found that bidders are willing to up their price dramatically in the last 15 seconds of the auction with 24% of the winning bids being placed then – an even higher amount than the overall auctions stats.

How can you win a Cartier Watch?

To understand the drama of buying things in an auction setting let’s demonstrate a day of bidding for one participant that desperately wanted to purchase a Cartier watch: Mr. or Ms. B21.

The data shows that B21 had a 21% chance to win in any given auction he or she participated in. But did they ever win a watch? How much did the end up paying? Let’s follow their bidding behavior to see the strategy behind the price given, timing, and the number of auctions they participated in.

The first auction B21 participated in was A1.

The winner was B4 who took the watch from B21 for a mere $25 more. Below are the detailed bids. B21 bids are highlighted in green and the winning bid is yellow. 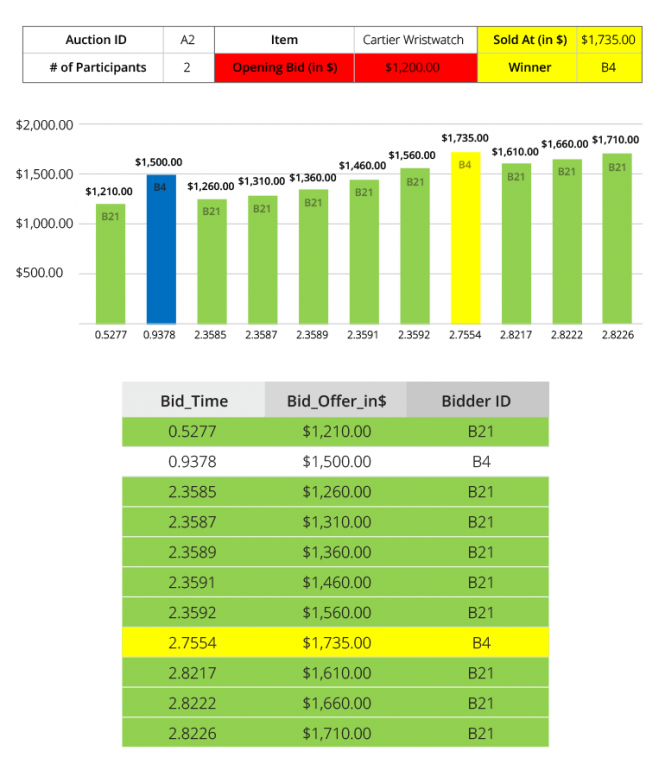 Our friend B21 placed 9 out of the 11 bids in this auction and still came up empty-handed.

The winner was B14 who took the watch from B21 for $126 more. Below are the detailed bids. B21 bids are highlighted in green and the winning bid is yellow. 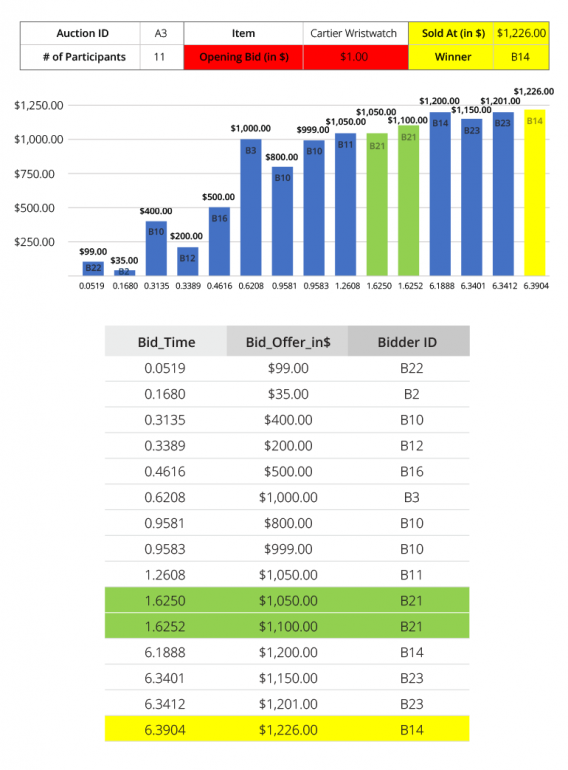 In auction three, B21 participated with only two bids. B14 came in at the last few seconds of the auction and put their bid in with $25 over the bid price and won.

The winner was B6 who took the watch from B21 for $525 more. Below are the detailed bids. B21 bids are highlighted in green and the winning bid is yellow.

This auction was very active with 41 bids placed in the seven-minute time frame. B21 came in at the first minute of the auction, placed a bid of $1,000, and believed the watch was his (or hers). However, towards the end of the auction things got busy and B7, B9, and B23 started to bring up their bids significantly. Finally, B6 came in and took the watch with $25 more than B9 who was at $1,500…Ouch.

Does B21 ever win a watch? Well, here is the good news: auction five brings a happy ending to this saga.

The winner was our friend B21 who took the watch from B28 for $10 more! Below are the detailed bids. B21 bids are highlighted in green and because B21 won this time around, there’s no yellow. 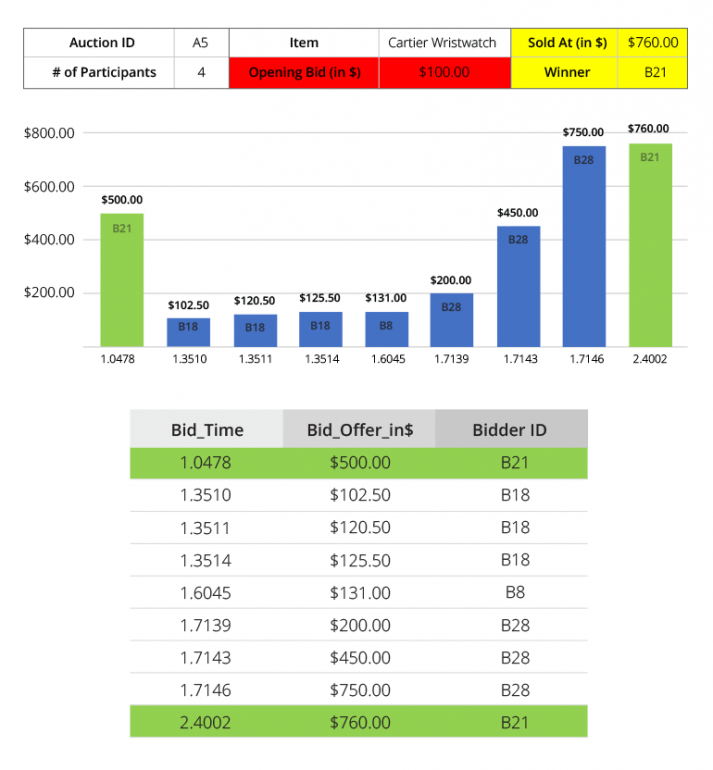 B21 won a Cartier wristwatch for $760 showing that persistence is definitely worth the effort. 🙂

To learn more about acution bidding strategies read the full GoFigure! report and analyze the data for yourself in our interactive dashboard.