Will 2018 Be The Year The World Cup Leaves Europe?

What can we analyze just before the Final between Team France and Team Croatia? Turns out a lot. But let’s first catch up on what we’ve predicted thus far.

The main question we explored was – “Who Will Challenge the European Domination in the World Cup?” In order to answer this question, before the World Cup tournament began, we built a success prediction model mostly based on:

Our model predicted that six out of eight teams that had a higher chance to make it to the Quarter-final were European. This success prediction was reinforced by the fact that historically, Latin American teams were less successful when the World Cup was hosted in Europe than in Latin America countries.

The highest success prediction based on our mathematical model was for Teams Spain, Portugal, Germany and Brazil, and Team Germany had the highest chance to win the FIFA World Cup 2018 – if, in fact, it reached the Final.

So, which teams were successful?

Like we predicted in our model, European teams dominated.

Teams with a high heritage rating were helped by this factor. However, a lot of these teams get to Round 16 but could not help them make it beyond that point.

The team with the highest chance to win in the World Cup based on our model was Team Germany.

On the other hand, teams with less heritage such as Teams Croatia, Belgium, and Sweden made it to the higher stages as opposed to our prediction model.

The most surprising teams without a great heritage were:

However, teams with a great heritage that succeeded during the tournament were:

So, what is the answer to our original question: Who Will Challenge the European Domination in the World Cup? The New European Teams – Croatia, Belgium, Sweden!

For the Final it seems that based on heritage factor France will win the Final. However, if we look at the “up and coming” factor, Croatia will win.

However, we will stick to our mathematical model and say France is predicted to win the final of the World Cup!

Now that the Group Phase is complete it’s time to see how our prediction model held up.

So how will Round 16 play out? We’ve updated our original prediction model by taking 70% of the original success predication and integrated 30% of the success score from the results of the Group Phase.

See our updated prediction model for Round 16 here.

FIFA World Cup is the biggest soccer event in the world! The World Cup is a quadrennial international tournament contested by national teams. This event interests and attracts billions of people around the world – males and females, young and old, from every walk of life. It seems like everyone is trying to predict who will go home with the magnificent cup. The national teams have been practicing, sales of big-screen TVs are skyrocketing, emotions are exploding!

It seems every time the World Cup rolls around there’s a challenge to try and predict the winners based on an objective statistical model that incorporates the endless amounts of data out there about the history of the games, the teams, the players, the money, and much more. So, as data analysts ourselves, we saw this as a great opportunity to put our analytical curiosity to work and bring true World Cup insights that everyone can enjoy.

How did we do it? What were our findings?

The Whole is Greater Than the Sum of its Parts

Analysis, like a good detective story needs an angle and our is that the whole is greater than the sum of its parts. With that in mind, we will predict the team success based on the team’s expected achievements. We will not dive into the individual stars or talents.

We will respect the history – teams have a heritage at the World Cup – regardless of where they come from, who is playing, and where. Even though there are new talents and new stars, heritage has an impact. This means we need to give each national team a success prediction based on their heritage in the world cup tournaments since 1930.

We will consider the qualifications to get into this World Cup. This means we need to give each national team a success prediction based on their points in the games in the last three years. We also need to dive into the qualification process to see if reaching the World Cup from Latin America is different than getting there from Europe. The success prediction we created considered how difficult it was to qualify.

Home is an Advantage

We factored in the home advantage – traditionally European teams do better when games are in Europe and Latin American teams do better when the games are in Latin America. Also, teams that host the games are more successful. Not only, historically, has the host reached the finals, they’ve won it! Essentially, regional and home advantage make a difference – perhaps this data is the reflection of the intense emotions in these games.

We allowed for the newcomers’ surprise factor. Newcomers are hard to predict and preparing to play against them is not simple. There have been surprises. So, we upped the success prediction for promising newcomers.

The recently published draw for the groups makes a difference. You must rank first or second to make it up to Round 16. When a team is dealt a challenging group it may play a role in their success. Remember, 16 teams will not even make it out of the group phase.

It seems that Team Germany (in Group F) and Team Brazil (in Group E) have an easier path to get to the Semi-finals than Teams Spain (Group B), Argentina (Group D), Portugal (Group B), and France (Group C). It just might be the luck of the draw here.

So, in the Semi-finals, it appears that Team Spain will be playing against Team Germany. In parallel, Team Brazil’s path to the Semi-finals includes playing against the strong Team Belgium. Team Brazil and Team Belgium will not meet the strongest teams such as Teams Germany, Spain, Argentina, Portugal and France until the Semi-finals. On the other hand, Teams Spain, Argentina, Portugal, and France will play against each other already in the Quarter-final. That’s not so lucky for them.

How will your team do? Dig deeper into the data in the interactive dashboard below and see what you can find. 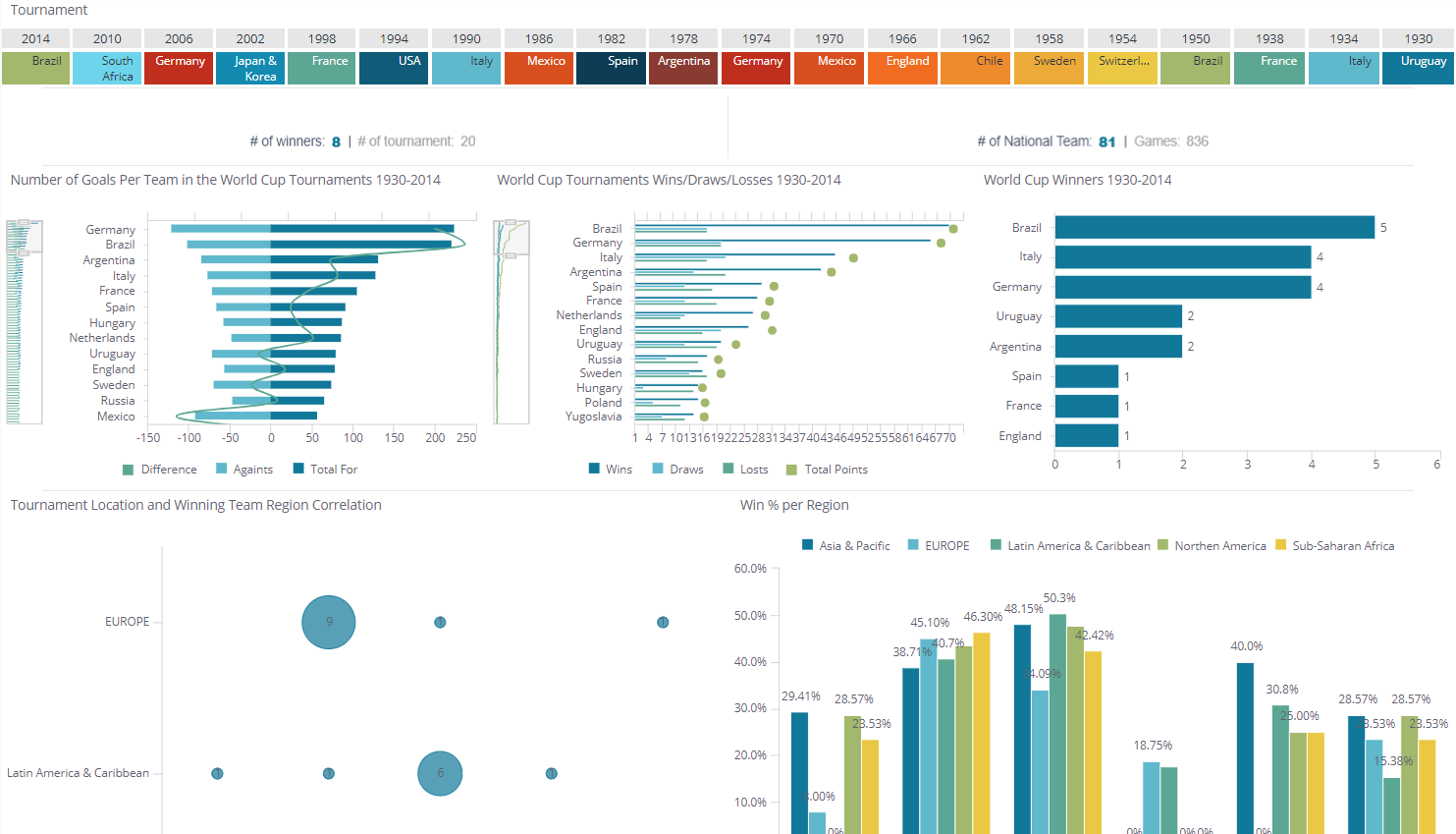