How Fiverr Uses Its Complex Data to Stay On Top

A Company Built on User Data Putting users first has always been a core value at Fiverr and it’s working...

A Company Built on User Data

Putting users first has always been a core value at Fiverr and it’s working well, allowing Fiverr to boast a blooming user base with close to 4 million services. From Spanish lessons to logo design, Fiverr now provides the world’s largest marketplace for creative and professional services–all starting at five dollars. While one Fiverr user paid off her loans and bought a house by offering her services as a voice over, another fulfilled his dream of becoming a rockstar. The stories just keep on getting better.

I even used Fiverr to convince a friend to visit me abroad with a creative rap song video just a couple of years after its launch back in 2012. That video has somehow racked in over 200 views even though it was just shared with some close friends and has zero marketing edge. Pretty wild.

So, how does Fiverr always stay one step ahead of the game? I sought to figure that out by visiting its headquarters and meeting Slava Borodovsky, Fiverr’s senior BI director and data scientist, who let me in on their company data strategy. Part of Fiverr’s enormous success lies in its ability to track user behavior, analyze it, and act on it quickly.

You may be thinking, “Pshh, yea I know I need to understand user activity…big data…buzzword, buzzword”, but Fiverr really does it. Fiverr has a team of data analysts dedicated to BI and uses Business Analytics Software for reporting in all departments–most heavily in product and marketing.

Though many companies know by now they need to collect data and learn from it, they often stop short of the latter. Usually because company data just keeps becoming more complex as it grows in size, comes from an array of data sources, and often needs remodeling in order to make it speak the same language.

Even technical departments find it cumbersome to combine large, disparate data sets in time for different departments with various goals to get actionable insights. It’s a mouthful just to describe the process, and it causes companies to back down from reaching insights.

Well, at Fiverr, complex data doesn’t scare anyone. Slava explained how his team collects tens of millions of rows of data, sometimes up to 20 million rows a day, to analyze. His team also connects data from a variety of scattered sources, such as MySQL with data from Google Docs, Spreadsheets and Analytics, in order to track every user action on the company website and mobile app. 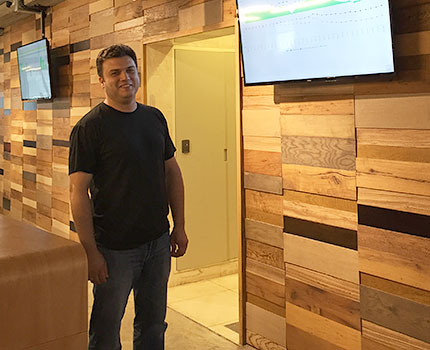 Sisense enables Fiverr to quickly and easily combine multiple large data sources and analyze data in web-based dashboards, and then share those reports across company. On every floor, there are TV monitors displaying close to real-time dashboards with various graphs, goals, and insights (as seen in picture). This way, the teams gain complete transparency into what is going on in every part of their website and mobile app.

Business Analytics as a Compass for Product Development

At Fiverr, company data is the most proven source of insight. Fiverr believes that in the world of e-commerce, gaining the upper hand is no longer about looking at what competitors are doing; it’s about learning from users.

Borodovsky explained the company’s approach to data involves flexible, quick analysis: “We are constantly changing the way we need to look at our data. We change the schema, we add tables, columns, and calculations because everything is dynamic and we need as close to real time results as possible.” After trying Sisense, Fiverr was able to reach their goal: “Within seconds we run a report with over 20 queries and see real-time results,” Borodovsky said.

The product department uses BI insights as a fundamental element of their development process to help navigate their product roadmap. “We don’t deploy features without understanding their value first,” explained Borodovsky. “As departments began understanding the impact of data on their success, the need for data became more urgent.”

Fiverr Knows How to Understand Its Users

Fiverr makes key product decisions based on user behavior that gives insights into what new features are needed and how a feature is resonating with their users. “From the beginning we were data driven, but since Sisense, it’s in our DNA,” Borodovsky said.

Fiverr’s strength is its ability to develop features that its audience needs and loves. And with growing international demand for outsourced services at affordable rates, it’s sure to be collecting many more data points in the future to use as the springboard for an even more robust platform.