Orgo is a custom application originally designed for the foodservice equipment and supply industry. With over 200 individual customers and over 1,000 registered users, their customer base is primarily made up of sales agents hired by manufacturers. The application was created to help sales agents track and control their business by combining all of the tools reps use - which typically includes a CRM, a quotation platform, a project management tool, and a sales and commission tracking tool - into a single platform. After receiving objections from sales prospects that Orgo’s analytics were below par, David Greene, Partner at Orgo, decided it was time to invest in an embedded solution. After embedding Sisense, they were able to close every single deal that was on hold due to analytics needs, accelerating Orgo above their competitors.

Analytics was always an integral part of Orgo’s offering but as a young company with only six employees, their in-house developed reporting was limited. The application had the ability to run reports manually by setting parameters, which would then generate a spreadsheet of numbers. However, there was no ability to drill down into the numbers and no visualizations of the numbers, leaving their customers needing to comb through rows of data.

Originally, this wasn’t an issue for early adopters of Orgo’s product. But once they began growing, they started receiving objections from potential clients that the application wasn’t able to generate the reports that they needed. This limited Orgo’s ability to make sales and prove the application’s worth over their competitors.

Orgo knew they needed a way to cancel out analytics based rejections so they started thinking about developing a solution in-house. However, they realized it was going to take too long, be too labor intensive, and consume too many internal resources. They began looking around to see what their options were. Once they saw the possibilities with reporting tools out there, they knew they couldn’t do it on their own.

Originally, Orgo went with a tool that was the cheapest they could find. As a young company (two years old at the time) saving on cost was the top priority. Looking back on the choice, David says it was a very poor decision on their part because the tool was incredibly hard to use, took months before developers were up to speed, and did not allow David to be self-sufficient. Every single time any one of their customers needed a change to a report, he wasn’t able to do it himself and had to ask a developer for help,
creating a bottleneck.

After realizing they needed a change, David found Sisense and conducted a demo. He says that once he saw just how easy Sisense was to use, he was sold. In the three years since implementing Sisense, David has spent a total of 10 hours working with his developers, everything else he has been able to do completely on his own.

Among the benefits Sisense has brought Orgo, David says the ability for him to be self-sufficient and do everything himself was a game changer. It not only allows him to save time but also allows their developers to focus on other core parts of the business.

What’s even better, he says, is that Sisense gave them the ability to wow their existing customers and take their close rate through the roof. After implementing Sisense, all of the deals that were waiting with the objection that their analytics weren’t good enough were immediately closed. Their embedded analytics is now head and shoulders above the competition, giving them the competitive edge they were looking for with minimal effort.

We close our sales pitches with analytics now because we always want to close with something to be remembered by. It has been a game-changer for us.

Not only has embedding Sisense into their application allowed for Orgo to take over the food service equipment and supply industry, but it has given them ideas for other revenue verticals.

There are other industries that work very similarly in terms of sales cycle and process to the food service equipment and supply industry. Orgo realizes this and sees exactly how their platform can fit into sales reps of all different kinds. Because of this, and because of their leg up with Sisense’s embedded analytics, Orgo is planning to expand into other areas very soon. The sky’s the limit. 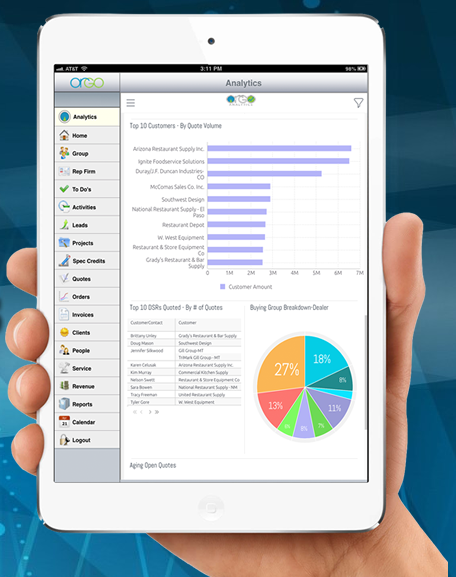