See it in action:
Watch Demo 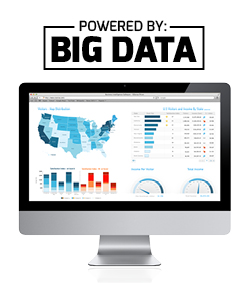 The Sisense ElastiCube analytics database was built for modern 64-bit hardware and latest CPU-chip architectures from the ground up, which gives it a considerable kick straight off the bat. ElastiCube’s In-Chip analytics utilizes disk, RAM and CPU so efficiently, that it enables a single commodity server to crunch terabytes of data on inexpensive hardware, and serve a large number of concurrent users.

Think about it. Off-the-shelf computers today are so powerful, you could tie a handful of them together and launch a rocket into space. Computers that cost 750 dollars have multi-core CPUs, having 64GB of RAM is not a big of a deal, and inexpensive disks can store terabytes of data. But to really tap into the true processing potential of today’s 64-bit computer and its hardware, modern software is architected for it, from the very first line of code. Software that was ‘migrated’ to it, like in database technologies that were developed in the 32-bit era, barely scratches the surface.

ElastiCube is disk-stored, which means the limit on its size is only tied to the size of available disk-storage, not RAM. Similar to other in-memory technologies, ElastiCube utilizes in-memory query processing for speed of calculation. But in contrast to these technologies, ElastiCube’s query processing engine (Elastic IQ) only loads and unloads data to and from RAM on-demand. This means RAM is only taken up by data you need access to right now, but the rest of the ElastiCube data is stored on disk, available instantly when requested.

For high-performance storage, ElastiCube utilizes a column-store, where data is stored on the disk as separate columns, rather than consecutive rows as in relational databases like MySQL. This storage tactic eliminates the notorious table-scan bottleneck, and also opens up opportunities for extremely effective compression, which ElastiCube employs extensively.

GETS FASTER AS USERS AND QUERIES INCREASE

No hardware upgrades required, scaling to more users is easy

Sisense has revolutionized the ability to scale users and queries by shifting the way caching is used. Traditional BI tools don’t gain much performance benefit from traditional caching unless identical queries are being requested each time. If the query has changed, even slightly, the CPU must re-calculate from scratch rendering the cached data useless.