Refugee migration: Where are people fleeing from and where are they going?

If you’ve been paying attention to the news, you likely already know that the Syrian Civil War is producing...

If you’ve been paying attention to the news, you likely already know that the Syrian Civil War is producing a staggering number of refugees who are fleeing their homes and seeking asylum. Refugee crises of a similar scale are also taking place in other regions of the globe…you just may not have heard about them.

So, where exactly are refugee crises taking place and where are people seeking asylum? In order to answer these questions, we dug into datasets provided by the World Bank in their open access global development data bank.

The basics of refugee crises

In order to understand the data, let’s start with a couple of simple definitions.

According to UNHCR, The UN Refugee Agency, a refugee is “someone who has been forced to flee his or her country because of persecution, war, or violence.” It should be noted that those escaping natural disasters also fall into this category.

An asylum seeker is someone who has fled their own country and “whose request for sanctuary has yet to be processed.”

It’s also important to remember that refugee crises are not only a humanitarian crisis but also a development challenge for countries that accept those seeking asylum. When breaking down the data – which accounts for the number of people fleeing between 2010-2016 and those seeking asylum during the same years – we tried to highlight both.

How many refugees are there?

In 2016, 16.9 million people were actively fleeing their home countries as refugees. In the same year, a whopping 22.5 million were seeking asylum.

When looking at the years 2010 and 2016 there has been a 165% increase in people fleeing their home countries under refugee status – going up to 16.9 million from 10.2 million. The cumulative number of people seeking asylum has increased 145% from 15.5 million to 22.5 million in that same period.

Numbers this big can be hard to digest so let’s break them down a little:

Imagine now if all of Australia suddenly found themselves in need of a place to flee – and fast.

Where are refugees coming from?

The refugee crisis is not centered on one specific area but can be seen in different parts of the world. The following chart shows the breakdown of where refugees are fleeing from by region between 2010-2016:

The chart above shows that the largest areas of unrest leading to the largest numbers of refugees are in the Middle East (which includes Syria), and Africa (which includes Sudan, South Sudan, and Somalia). Africa made up 36% of the global refugee population in 2016 with over 6 million fleeing in that year. The Middle East was responsible for another 36% of the refugee population in 2016 contributing just over 6 million (with the vast majority coming from Syria – 5.5 million).

The third biggest group of refugees in 2016 was from South Asia (including Afghanistan and Myanmar) which saw 3.3 million flee that year making up 19% of the global number. However, whereas Africa and the Middle East have seen a steady rise in the number of refugees between 2010 and 2016, going up approximately 3.2 million and 4.2 million respectively, South Asia has seen a slight decrease from its 2010 value.

Where are people seeking asylum?

It’s no surprise that when a person leaves one place they need to settle somewhere else. In the case of the refugee population, this may mean crossing international borders into a different country or becoming an internally displaced person (IDP) within their home country. According to the UNHCR, some countries with the largest populations of IDPs are Syria, the Democratic Republic of the Congo, and Somalia. Keep this in mind as you view the numbers below.

This chart shows the major areas of refugees seeking asylum:

In both cases the numbers of refugees seeking asylum in these regions have skyrocketed from the 2010 value, going up over 3 million each from their 2010 values. South Asia is fourth with 2.1 million seeking asylum in 2016 (9%), which is nearly a half million less than in 2010.

How do specific countries contribute?

In order to understand even more specifically where people are fleeing from and where they’re going to, we broke down each region by country and dug further into the data.

In our full report, you can read in-depth about specific countries contributing to the refugee population as well as those where refugees are seeking asylum.

You can also explore the data for yourself in our interactive dashboard. 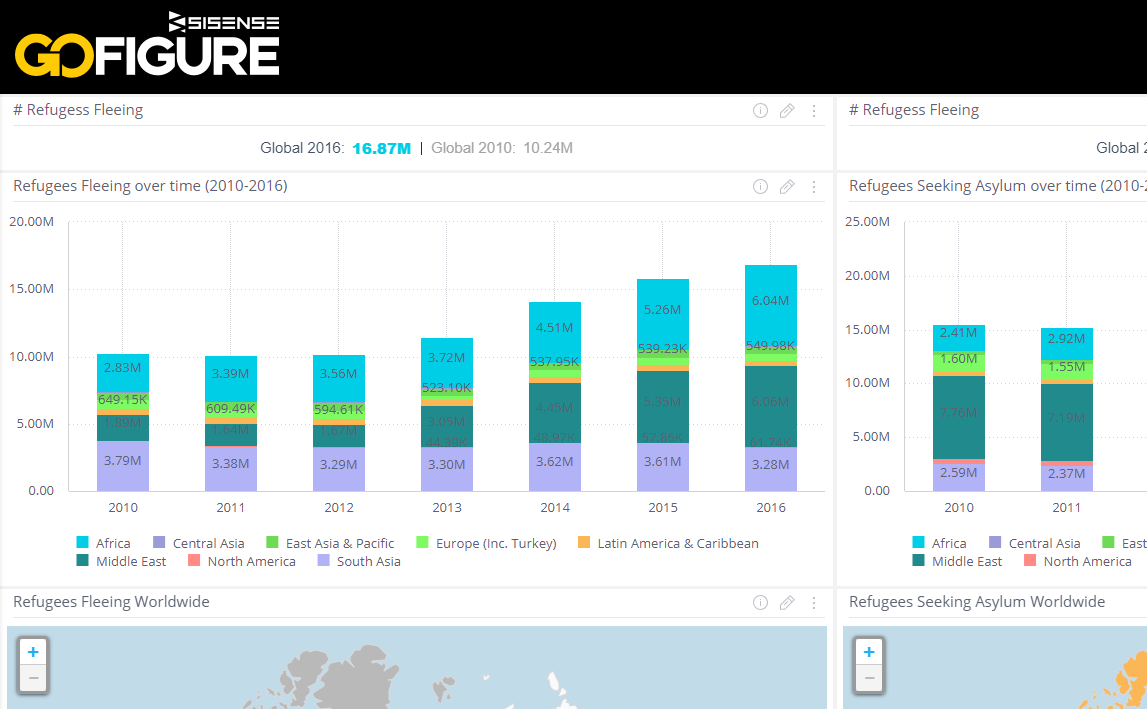 Get the free report

Get an in-depth analysis of where refugees are fleeing from and where they’re seeking asylum.